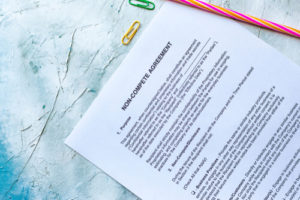 Non-competition agreements, also known as covenants not to compete, are commonly used in Houston and Texas to protect the goodwill and business interests of companies. The use of these agreements allows companies to properly train employees and provide them with confidential information such as trade secrets without fear that the employee will leave the job and set up shop in competition. Civil litigation involving non-compete agreements is often necessary to stop improper competition and protect company information.

Must be Part of Another Contract

The law involving non-competition agreements is constantly evolving and there are often agreements drafted and signed by companies and employees which are in fact unenforceable.

Must be Reasonable in Time and Geography

Covenants not to compete must be reasonable as to time and geographical and not impose a greater restraint than is necessary to protect the goodwill or other business interest of the company.

Our former employee is in breach of a covenant not to compete. What can be done?
ASK A LAWYER NOW!

Enforcement of a Non-Competition Agreement

When a former employee breaks a covenant not to compete, the former employer’s business can be a great financial risk if the employee takes his or her knowledge and training and goes into direct competition. The most common (and most effective) remedy for a company is to go to court to seek an immediate court order stopping the employee from competing – or using confidential information. This is known as a temporary restraining order or “TRO” and is obtained from a judge as soon as a breach of contract lawsuit is filed.

If you are involved in a lawsuit involving a non-competition agreement or a contract with a covenant not to compete, contact the Houston injury lawyers at Fleming Law, P.C., by phone at (737) 201-0543 or filling out our contact form today.