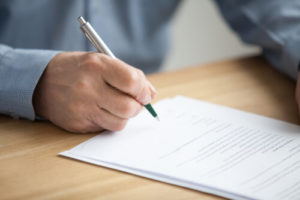 If your inheritance has been taken away because of a forged Will, you can take action in the probate court to have the document declared invalid. When this is done, the prior Will, if there was one, will be used to distribute the estate of the deceased person. If the forged Will was the only one in existence and the deceased never had a prior Will, their estate will be distributed according to state law.

How can you prove the Will was forged?

Proving a forged Will is the same as establishing any other forgery – an expert compares the signature on the suspicious document with items known to have been signed by the testator (the person executing the Will). Such handwriting comparison is valid and professional have the ability to expose the forgery.

My father's signature on his Will looks fake and I was cut out of my inheritance. What can I do?
ASK A LAWYER NOW!

A forgery of a Will can be done in many ways including:

Forging of Wills has been taking place since the written document was first used. It can be perpetrated by family members, household workers, friends, charity workers, step-children – anybody who wants to acquire a financial interest in an estate. If you were initially the beneficiary in a Will that was suddenly changed, you may have grounds to file a challenge to the new Will if it can be established that forgery was involved in the execution of the document.

Others Involved in the Forgery?

One major hurdle for a forger to overcome in producing a fake will is the necessity of having witnesses for self-proving document. This means the perpetrator must either forge the “witnesses” signatures or involve them in the plot. If you have a suspicious will that has been filed for probate that cut out your inheritance, the witnesses listed on the document can be contacted to see if they indeed did witness the execution. If they did not sign it, the will can be disregarded by the court. If they did sign it but did not see the testator sign the will, the court will also set the Will aside. When this happens, the prior Will will control.

If you have been cheated out of your inheritance due to a suspicious “new Will” allegedly executed by a loved one or friend, you can seek to have the probate court declare the new will void if it can be shown that it was forged.