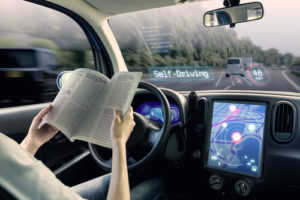 In North America, most of the development and testing of autonomous cars is taking place in the state of California. The number of companies and cars involved in developing these vehicles and technologies continues to grow. In fact, in 2014 there were approximately five companies and 20 cars, while in 2017 that number has increased to 25 companies and 175 cars. But how will self driving cars affect accidents and claims in the future? If you have recently been involved in a car accident lawyer in Houston, call us today!

Recent Innovations Move Us Toward a Self-Driving Car Experience

A number of self-driving technologies are being used today in cars and trucks all across America. Adaptive cruise control can detect a car in front of you and automatically reduce your speed. Prior to this innovation, the driver had to recognize this situation and hit the brake to temporarily disengage the cruise control.

These features are also known as “driver fatigue detection” systems, alluding to the situation in which a driver is tired or sleepy and therefore has a decreased ability to concentrate and react in time to changing road and traffic conditions. Using cruise control in “stop and go” rush hour traffic would have been pointless, and quite dangerous, but with recent advancements, your car can automatically drive, sensing when to reduce speed to a stop and resume. Other innovations include the following, and much more:

Who was at fault for my car accident?
ASK A LAWYER NOW!

What Impact Will Self-Driving Cars Have on the Insurance Industry?

With the exception of new drivers, all drivers have some amount of history. Most drivers have years of history which allows insurance companies to perform their calculations and set premiums based on risk. With the introduction of self-driving cars not only will there be a dramatic shift in establishing premiums but large groups of drivers will arguably be new drivers. It will take time for manufacturers to build enough driving history so that insurance companies can effectively set premiums as they do today.

Litigation Will Move to Product Liability From Driver Negligence

There are many reasons why car accidents happen when humans are behind the wheel. The most concerning these days is drunk driving, texting and driving, and distracted driving, just to name a few. With the introduction of driver-less cars, things will change dramatically.

Product liability cases are entirely different from car accident cases where an individual and their insurance company is sued. A police officer who investigates the scene of the crash will, in many cases uncover the facts that led to the crash. If a driver ran a stop sign or a red light and t-boned another car injuring the occupants then negligence can attributed to the driver and a police officer will issue a citation for failure to yield the right of way.

In a scenario where a self-driving car is involved the driver is removed from liability. The car is designed, using radars, GPS, laser and control systems to detect and interpret stop signs, traffic lights and right of way precedence. It is too early to say with certainty, but in a world with self-driving cars liability will shift to manufacturers and their suppliers. A defect in the software used to interpret signals provided by radars and lasers could be the underlying cause of accidents in the future.

Police officers at the scene of accidents today can establish liability by questioning those involved. In the future determining the cause of the accident will likely come from some type of black box in the self-driving car.

Self-driving cars are sure to decrease the number of fatalities and injuries that occur on Houston’s roadways. But until everyone is driving in an autonomous car, there will continue to be horrific auto wrecks on an hourly basis throughout Texas. If you were injured or a loved one was killed in a tragic car crash, an attorney will help you get the financial compensation to which you are entitled. Call the Houston car accident lawyers with the law offices of Fleming Law, P.C., at once for help.