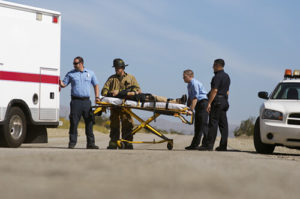 If you are a cop or other law enforcement officer and need a lawyer for your injury or other claim, contact Michael P. Fleming today. Mr. Fleming has represented law enforcement at all levels of our judicial system. He has successfully handled cases in the Texas trial and appellate court levels and has tried, argued and won cases in the federal trial and appellate courts – including the Supreme Court of the United States of America.

Michael P. Fleming began representing cops hurt on the job when he was fresh out of law school in the 1980’s when he took the case of a Houston police officer who was the victim of a car accident caused by a drunk driver. That case resulted in a favorable settlement for his client. Mr. Fleming then went on to work as an assistant Harris County Attorney where he made his mark as a dedicated defender of sheriff and constable deputies who had been sued in federal court for alleged civil rights violations.

He handled cases for deputies and the sheriff including wrongful death, civil rights, first amendment and alleged excessive force claims. He handled and tried jury cases for law officers in the federal trial and appeal courts. In 1995, he decided to seek election as the Harris County Attorney and – with the support of many cops – won that position in the general election of 1996.

Are you a cop with an injury?
ASK A LAWYER NOW!

The law enforcement attorneys at Fleming Law, P.C. accept cases for cops and other law officers in a vast variety of matters including: