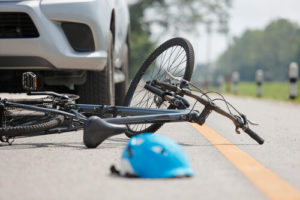 Bicycle accidents are a major cause of serious injuries and death to both adults and children in Houston and all over Texas. If you or a loved one have been hit by a car while cycling, you need competent, Houston bicycle accident lawyers working for you from the start. Since cyclists usually have every right to be in the main traffic lanes, they must follow the rules of the road like folks in motor vehicles. Likewise, drivers of cars must respect the rights of way of cyclists and owe a duty to avoid injury to them. The bicycle accident attorneys at Fleming Law, P.C. represent cyclists that have been hit by motor vehicles such as cars, trucks, and motorcycles.

How do You Prove Liability if You Have Been Hit While Cycling?

Proving liability under Texas law is the same as in car accidents.  As in any negligence case, a bike injury claim is proven by showing a duty, breach of that duty, causation, and resulting damages.  Everybody has a duty of reasonable care in their interactions with other people.  An example of this would be the duty to be on the lookout for cyclists and take care when passing them. Breach of duty could be speeding or not paying attention when driving around a bike rider.  Causation simply means that the breach of the duty of reasonable care caused the injuries or damages. For example, when a speeding motorist hits a cyclist and the accident would not have happened but for the speeding, negligence is proven.  The injuries sustained by the rider would be the resulting damages.

What Should You Do After a Cycling Accident in Houston?

Depending upon the severity, police are often not called after a cyclist is hit by a car. Therefore, in order to protect your right to compensation certain steps should be taken by you or somebody acting on your behalf at the accident scene. Specifically, after a bike accident, you should:

1. Call the police. Even if you don’t call 911 and nothing is broken, you should notify the police if you are injured. They will create an accident report with the names and addresses of the driver and any witnesses. If the car driver was at fault, a citation will be issued. If the driver is intoxicated, they will be arrested.

2. Exchange information. Get the insurance and driver’s license information from the other party. It is also a good idea to take a picture of both items and of the license plate.

4. Get medical care. Even if you don’t call an ambulance or go to the emergency room, you should always seek medical care if you are hurting. Refusing medical care when you are in an excited state is always a mistake. Especially in bicycle accident cases, significant injuries may not manifest until the next day or two. Delaying medical assistance because you are hoping the pain will subside can delay recovery and hurt your ability to seek compensation for your injuries. Insurance companies always claim that a delay in treatment is evidence that there were no injuries. 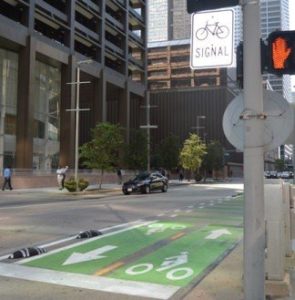 In many cities, there are no protected areas for cyclists to ride and they must use the main lanes of vehicle traffic. In fact, many cities require bicycles to be in the main traffic lanes. Some places have started using protected bike lanes such as the one shown in the photo at left. Even these are no guarantee of protection as some drivers either don’t know what the bike lanes are for or ignore the signs restricting them to bicycle traffic. Houston has begun installing bike lanes in the downtown area but this does not come close to covering the hundreds of miles of roadway used by cyclists in area every day. It seems that the only truly safe place for cyclists to ride in is in large parks such as Terry Hershey park. However, the increasing number of bicycle riders in Terry Hershey interferes with pedestrian traffic. The solution is probably dedicated, new, bike lanes that don’t reduce traffic lanes. It seems that these new, expensive, dedicated lanes that take up a whole lane of traffic do nothing to create a safe place for leisure bikers because they are in parts of town that are not conducive of an enjoyable riding experience. Just look at the dedicated lanes in downtown Houston on any given day – they are empty while automobile traffic in the remaining road lanes is worse.

What are the Dangers of Cycling Collisions?

The United States Centers of Disease Control reports that over nine hundred cyclists are killed and 500,000 severely injured every year in this country. While these numbers include those killed and injured NOT involving a motor vehicle, the measures that can easily be taken to escape injury and death are the same. It basically involves two things – the use of a helmet and riding on a safe terrain. Helmets are obviously common sense for children but adults can avoid serious injuries by also using protective gear. In fact, the City municipal code Section 45-326 makes it illegal for anybody under the age of 18 to ride without a helmet and it is a crime for any parent to allow a child under the age of 14 to do so.

What are the Common Causes of Cycling Traffic Collisions in Texas?

Our Houston bicycle accident attorneys have seen several types of bike accidents. Crashes with cars can be caused by many factors including:

I was on my bicycle when I was hit by a car. Can I sue?
ASK A LAWYER NOW

A bicycle accident caused by a car driver or other reason can result in terrible injuries including:

Michael Fleming (June 25, 1963 – July 1, 2020) participated in the MS 150 charity bike ride from Houston to Austin many times. He understood the dangers and needs of cyclists and as a board-certified bicycle accident and car accident lawyer, he knew what has to be done to protect your rights after being hit by a car. Call the expert Houston bicycle accident lawyers at Fleming Law, P.C. today for a free consultation.