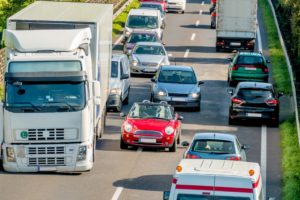 While many roads in Texas are remarkably open and allow drivers greater room and freedom to operate, traffic tends to get more congested on the highway in major cities like Houston. The Northwest Freeway (U.S. Route 290 or U.S. 290), Katy Freeway (Interstate 10 or I-10), and the Sam Houston Tollway (Beltway 8 or BW8) are just three examples of the larger multi-lane highways that see heavy traffic—and thus, frequent lane change car accidents.

How do you determine fault in a changing lanes car accident?

One of the most common types of collisions people are involved in is crashes caused by improper lane changes. Lane change accidents can be challenging claims for people to file because it is not uncommon for both drivers involved in these types of accidents to claim the other was at fault.

If you were recently injured in any kind of lane change crash on the Houston area, it is in your best interest to quickly contact Fleming Law, P.C. Our firm can review your case and help you understand all of your legal options as soon as you call us or contact us online to receive a free consultation.

Texas law requires drivers to signal before changing lanes. One of the most common reasons for changing lanes is to pass another vehicle. Texas also establishes laws about passing.

These limitations do not apply on one-way roadways or to drivers turning left into or from an alley, private road, or driveway.

Passing to the right is much rarer, and generally discouraged. A driver can pass to the right of another vehicle only if it is safe to do so, if the vehicle is about to make a left turn, and the driver is on an unobstructed roadway with enough space to pass.

While driving on the right shoulder is usually prohibited, there are certain occasions when it is allowed. A motorist can travel on the shoulder if necessary and safe in order to stop, merge into moving traffic, make a right turn, pass a slowing or stopped vehicle, allow another vehicle to pass, to obey instructions from a traffic-control device, or to avoid a collision.

A motorist can drive on the left shoulder only in order to stop, avoid a collision, or obey a traffic-control device. These limitations to driving on the shoulder do not apply to emergency vehicles, police, or bicycles.

Most lane change crashes are the result of some violation of one of the laws described above. Some of the most common reasons that lane change collisions occur include:

In some cases, the police officer responding to the crash may issue a citation to the driver who fails to maintain their lane.

With lane change crashes, disputes about who was actually at fault are common. For example, if one driver failed to signal before changing lanes, and the other driver was speeding, it may be unclear who is ultimately at fault for a resulting collision. As a result, insurance companies for both drivers are very likely to argue that the other driver was entirely at fault.

In general, determining fault is important because the driver who is ultimately found to be at fault is then responsible for all victims’ damages, including medical bills, lost wages, and pain and suffering. The more at fault the other driver is found to be, the more money you may be able to collect.

An experienced attorney will conduct an independent investigation of the crash to help secure the evidence necessary to prove the other driver was at fault in these types of cases. This investigation may involve speaking with law enforcement, interviewing witnesses, and even reconstructing the accident. Allowing a lawyer to do this for you could increase the likelihood of the other party being found at fault. A lawyer can also ensure that you don’t do or say anything to cast blame on yourself, compromising your case.

It is not out of the question for a police officer to issue tickets to both drivers involved in a lane change accident. For example, one driver may be cited for failure to maintain their lane, but the other driver could receive a citation for speeding.

A certain degree of shared fault is not entirely out of the question in lane change crashes, but victims in Texas can still recover compensation so long as they were not primarily at fault for causing the collision. Texas is a modified comparative fault state, which means that an accident victim will have their damages reduced by their portion of fault.

Under this system, a driver who is awarded $100,000 but is found to be 20 percent at fault would have their award reduced by $20,000 and would ultimately receive $80,000. If a driver is more than 50 percent at fault, they cannot recover any damages.

The Importance of the Police Report

The Texas crash report that is filed by the responding officer can go a long way in determining the liable party for a lane change crash. Insurance companies will request a copy of the crash report, and may rely on it heavily when determining fault.

Accident reports not only include any citations that were issued as a result of an accident (which may be used to demonstrate negligence), but they also include the investigator’s written narrative about what occurred, and possibly diagrams of the incident.

Texas crash reports can often be difficult for victims to decipher because they are handwritten by investigators. Fleming Law, P.C., can help you obtain an accident report and identify the most beneficial information contained in it.

If you have been injured in a lane change accident in Texas, Fleming Law, P.C., can help. We are a top-rated firm with experience winning cases all the way at the Supreme Court. Attorney Michael Fleming is a board-certified personal injury specialist, and our practice is 100% devoted to personal injury law. We understand personal injury, so we will understand your case.

We will do everything possible to win your case for you. We will investigate your accident, call in experts, compile evidence, negotiate with insurance adjusters, collect all the necessary evidence, file all required paperwork, fight for the full amount of compensation you are owed in negotiations or court, and keep you informed, relaxed, and taken care of throughout the entire process. Call us or contact us online to have our attorneys provide a complete evaluation of your case during a free consultation.