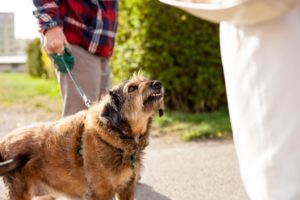 Being attacked by a dog is a frightening experience that often leaves the dog bite victim confused about their legal options. Certain dog bite injuries can result in significant medical expenses and may even cause disfigurement that lasts for the remainder of the victim’s life.

Report the Incident to Your Local Animal Control.

Before you consult with a dog bite lawyer, you should report the attack to your local city or county animal control department. In fact, most cities and counties in Texas require anyone with knowledge of a dog attack to report it to the proper authorities.

Dog bites are far from uncommon. The Centers for Disease Control and Prevention (CDC) reported that 4.7 million dog bite attacks occurred in the United States in a single year. Almost 800,000 of those bites required medical attention.

If you or your loved one sustained severe injuries in a dog attack in Texas, it is in your best interest to quickly retain legal counsel. Fleming Law, P.C., represents clients in Houston and many surrounding areas of Texas.

Our firm can work to help you pursue the compensation you need to recover from your injuries. Call us or fill out an online contact form to have our lawyers review your case and help you understand all of your legal options during a free consultation.

Why Do Dogs Attack People?

The American Society for the Prevention of Cruelty to Animals (ASPCA) notes that the term “aggression” can encompass a large number of behaviors in dogs. In some cases, a dog will exhibit some kind of warning before it attacks.

Some dogs may growl or show their teeth, while other dogs may become very still and rigid before attacking. In most cases, dogs bite in an effort to protect their offspring, their territory, or themselves.

It is not uncommon for a dog owner whose animal bites another person to claim that the dog bite victim provoked the canine. But this may be a misstatement of facts, as many dogs attack without warning and without being provoked. Many times the reason for the attack is unclear. The absence of a warning should not imply provocation on the part of the victim.

What is the Texas ‘One Bite’ Rule?

In Marshall v. Ranne, 511 S.W.2d 255 (Tex. 1974), the Supreme Court of Texas stated that the correct rule for vicious animal cases was Sections 507 and 509 of the Restatement of Torts. Restatement of Torts § 507 establishes that the owner of a vicious animal is subject to liability to others (except trespassers) for such harm done by the animal as the result of a dangerous propensity characteristic of animals of its class or the owner has reason to know. Restatement of Torts § 509 provides that an animal owner who has reason to know their animal has dangerous propensities is subject to liability for harm caused by it  to others, except trespassers.

The requirement that a dog have previously bitten or acted aggressively is more commonly known as the “one bite rule.” Texas is one of many states that follow such a doctrine. Even when a dog has never previously displayed any violent tendencies, it may still be possible to obtain compensation from the dog owner through other types of civil claims, such as negligence.

Certain communities in Texas also have breed-specific legislation (BSL) that classifies certain breeds of dogs as vicious. Childress, Forest Hill, Garland, Madisonville, and Magnolia all have ordinances either banning, restricting, or labeling pit bulls as dangerous, for example.

What Should I Do After Being Attacked by a Dog in Texas?

The first step that any victim should take after being bitten by a dog is to get medical attention. This is true even when a dog bite does not appear to have resulted in an injury. Failure to treat bites promptly can result in possible infections or other consequences.

Additionally, failure to get medical care will often lead to an insurance company questioning the severity of a claimant’s injuries. In some cases, insurers will argue that delays in treatment are evidence that the injuries were not particularly serious.

It is particularly important to seek immediate medical care in the instance of a stray dog bite, as they carry an increased risk of rabies infection. Rabies can be deadly when it is not treated in time. Proper care requires that bandages be changed several times a day, in order to prevent infection.

Identify the Dog and Its Owner

In many cases, the dog bite victim is aware of who owns the animal. In fact, the relationship between the victim and the dog owner often makes it somewhat difficult for them to consider pursuing the compensation to which they are entitled, because such people are usually friends, family members, or neighbors of the victim.

This personal relationship often causes the dog bite victim to second-guess an injury claim, fearing that it may cause the owner financial hardship. But the truth is that most dog bites are covered by the dog owner’s homeowners’ insurance policy. The owner’s insurance company is usually responsible for paying compensation on these claims.

When a dog owner’s identity is not immediately apparent to a dog bite victim, the victim should be sure to report the incident to the police. Victims should also contact authorities when the owner of the dog is uncommunicative following the attack. If possible, they should try to take a picture of the dog.

As soon as you are injured by a dog, be certain to take pictures of your injuries if at all possible. The outward appearance of your wounds will heal over time, so it may be beneficial to have photographic evidence of the true nature of your injuries at the time of the attack.

After the dog bite, you should also try to keep a journal. Write down all the challenges that you are facing because of your dog bite injuries, as well as any pain you are experiencing.

Also, be sure to save all medical bills relating to the treatment of your dog bite injury. Write down any medications you are taking, and observations from any treatment or therapy sessions.

After you have received medical treatment for your dog bite injury, it is important to follow through with all recommendations from your treating physician. Most dog bite cases involve immediate wound management and antibiotic treatment, as well as assessment of possible rabies risk. Antibiotics treatment may last several days.

More severe cases may require weeks or even months of treatment and rehabilitation. It is important to make sure you receive the recommended care so you can heal properly.

Most homeowners’ or renter’s insurance policies provide coverage for injuries caused by the policyholder’s pets. It is important to remember that an insurance company – not the dog owner – will be ultimately responsible for paying your claim in most cases.

While homeowners’ insurance providers pay most dog bite claims in the United States, the companies’ first priority is their bottom line — not your wellbeing. Some insurance companies may refuse to provide coverage for certain breeds of dogs, while other insurers may require dog owners to sign liability waivers.

Some people may initially think that they do not need an attorney to handle their dog bite claims. Victims need to understand that handling a dog bite case without legal counsel can make the recovery of damages far more difficult and decrease the likelihood of success. Most people do not appreciate the complex liability issues that will need to be proven in order to successfully resolve a dog bite claim.

Furthermore, insurance companies representing dog owners know that unrepresented victims are more likely to settle their cases for less money because such individuals are often unaware what their cases are actually worth. This lack of knowledge allows insurers to aggressively push for settlements that are usually nowhere near what victims are actually entitled to.

If you’ve been the victim of a dog bite in Texas, you should contact a qualified lawyer to evaluate your dog bite claim. An attorney will be best equipped to assess your situation and advise you about your legal options. This is the best way to pursue compensation for all of your losses, including medical bills, lost wages, and pain and suffering.

Did you or a loved one suffer serious injuries in a dog attack in Texas? Do not speak to any insurance company about your incident until you have legal representation.

The dog bite attorneys at Fleming Law, P.C., help victims and their families across the greater Houston area. You can have our attorneys provide a complete evaluation of your case when you call us or contact us online to schedule a free consultation.