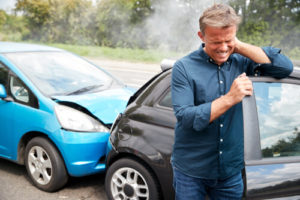 Chances are that if you were involved in a traffic collision, you sustained a serious neck injury. The force of a car coming to a complete stop in a matter of seconds, or from being hit from behind by a driver who was looking down at a phone instead of applying the brakes at a stop light can be enough to cause serious soft tissue damage or worse. If you have been injured, call our experienced car accident lawyer in Houston today!

Neck injuries can be caused by a violent rear-end car accident or a head-on collision. The worst type of neck injury is that of a broken neck. When the neck vertebrae sever the spinal cord, paralysis or death can occur, according to Orthoinfo. The severity of paralysis that a car crash victim suffers will significantly impact the amount of compensation to which he or she is entitled.

Whiplash occurs when the head “whips” forward and/or backwards suddenly, causing soft tissue damage to muscles and ligaments, according to Medscape. This forward and backward motion is called flexion-extension, and it does not take a very fast collision to cause significant and long-lasting whiplash pain. Whiplash can even affect young and healthy adults for weeks, months, and even years, impairing their ability to work, play, and live their lives as they did before the traumatic incident. People who sustain whiplash injuries have the right to sue for significant pain and suffering damages.

I sustained a whiplash injury in a car accident.
CONTACT US!

According to Back Health, the following is true of whiplash victims:

Unfortunately, there is not a whole lot to be done to heal a whiplash injury other than taking time to rest. A physician may prescribe Non Steroidal Anti Inflammatories (NSAIDs), hot and cold compressions, physical therapy, bed rest, a neck brace, and other measures to reduce the pain and to rebuild the strength of the muscles and supporting ligaments. However, the recovery process is time intensive. A broken neck will require either a cervical brace for a more minor fracture, or a “halo” neck brace with screws drilled into the skull for half a year. If the spinal cord is severed, there is nothing that can be done to fix it.

Call an Attorney for Compensation

The party that injured you or your loved one deserves to be held financially responsible for your extensive injuries. Call the Houston injury attorneys of Fleming Law, P.C., for help recovering financial compensation today.